I was taking a poke around the Simple Scrapper website (Krista used to be on their Design Team and introduced me to it) and I found a great printable that I just had to use.

As soon as I saw the “Keep Calm and Love On” card I laughed and knew the exact picture for it! I kept poking around, looking at some of their sketches and found the Template Jane sketch. I changed it up a little, of course – that’s the beauty of sketches! – and ended up with this LO:

Keep Calm and Love On

Used my Crafter’s Workshop stencils and Clay Mist, naturally, my faves, and a bunch of washi tape.

I layered on the Glossy Accents – remember my very first Technique post? – and the shine on the wood veneer hearts is awesome!

Finally, my favourite part, a real stroke of genius I think, my pumpkin!

That’s a wood veneer apple from the Studio Calico School Icons! Is that the best, or what?!? Patting myself on the back for that one! 🙂

Love how this turned out, easy to do, still looks like me even though it’s from a sketch, and the journaling is actually out in the open for once, thanks to Ali Edwards!

Do you use sketches? What’s your favourite place to find them? And do you love shiny hearts as much as me?

I spent last night at The Paperie taking Cathie’s Starburst and Pinwheel Class with some scrappy friends. We had a blast and the LO’s were awesome! Equally awesome? The stuff I came home with!

How do you all feel about classes? Are you happy to simply do them and come home with your projects or do you like to get extra stuff too?

Me? I’m all about the add-ons! Love getting a little something to carry away, especially if I learn something new and get a product so I can recreate the projects in my own way. Last night, we all got a pack of Thickers (I already had the green so I exchanged them for the black) and a 6×6 Amy Tangerine Sketchbook paper pad – pretty sweet, my friends!

The starburst LO we completed was this one: 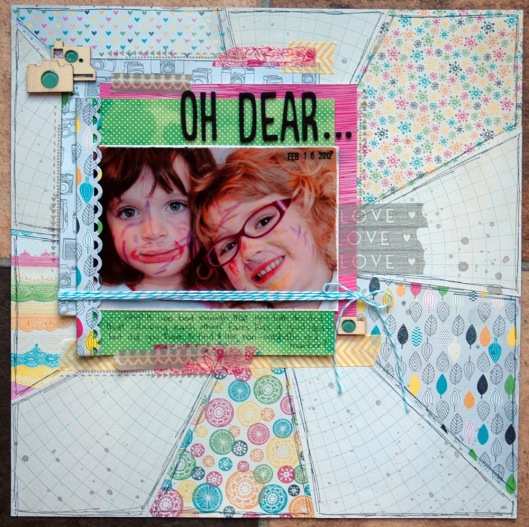 Of course, I had to make things difficult and use different papers so that slowed me down a little, but I love the end result. Cathie also showed us how to make a stencil from our starburst and how to tone down the bright papers we were using.

I had to come home to finish this one since the picture I brought just didn’t work. I’m glad to get this photo on a LO though, because it was a pretty funny day – M & P chose to colour each other, but with non-washable red marker. They had streaks on their faces for days! 🙂

The second LO featured a pie chart and again, Cathie suggested a couple of ways of doing it and some other project ideas too. 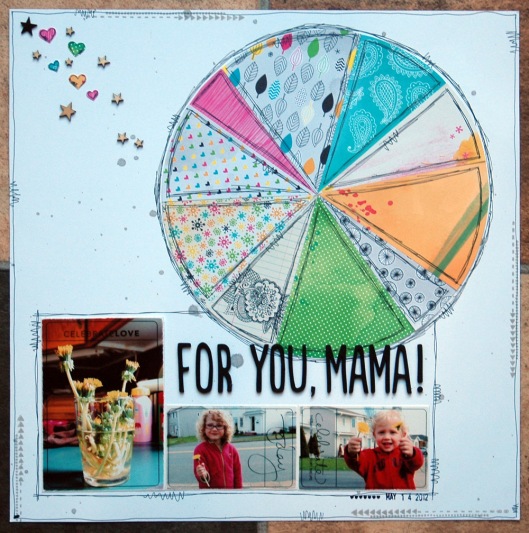 Again, I made things hard on myself and used different papers which meant time sorting out what to put where but at least I got these photos scrapped, since they probably wouldn’t have been otherwise!

M & G love to pick me flowers and on this day, shortly after the dandelions came out in bloom, they insisted on keeping them in a “vase” of water. As you can tell, I’m also in love with the Ali Edwards photo overlays from Designer Digitals. I have to force myself not to drop them onto every picture – a battle I lost for this LO!

Hope you liked them – go over and tell Cathie what you think – maybe we can get her to teach some more classes! 🙂

The weather, though not at all fall-like, was gorgeous on Saturday so I dragged the family off to the park for a picnic and photos – I needed an undated one for the first page of Project Life! 🙂

Now, you know how Miss M feels about pictures, it’s a horrible, terrible thing I torture her with! So she was told that we need the picture and then we could go feed the ducks and play at the playground – the quicker the pictures, they longer the playing.

But I got some awesome out-takes (and one semi reasonable family picture!).

This is limp noodle M and G wondering why he has to behave if she doesn’t.

This might be my favourite one – M couldn’t look more pathetic, G is having the time of his life “drumming,” and D is already pretty PO’d at the whole situation! This one makes me laugh! 🙂 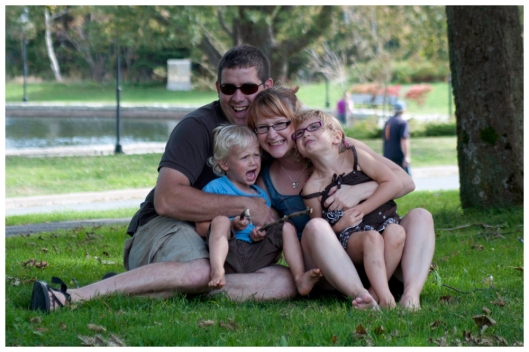 Now we’re getting to the point where G is getting fed up and M is *still* not cooperating. 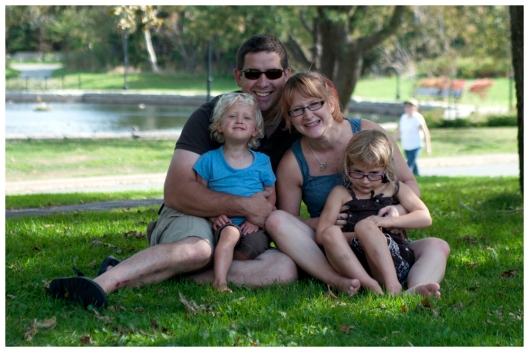 This is another fave – see that sweet face on my boy? And M is glaring at the camera over her glasses – hilarious!

Now we’re getting somewhere – she’s trying really hard not to smile here! It’s only a matter of time, my friends, before I win!

Yes! One that will work and no one looks grumpy! I win! (insert big fist pump here)

On a side note – don’t you love that Ali Edwards/Designer Digitals overlay? I’m going to have to reprint the picture just like this for my PL album, I have it in there now just plain and it looks so boring!

And notice how there is no “S” on my picture? It’s the only letter I’m missing from my Studio Calico wood veneer letters so I’m trying to decide what to do there…. If anyone has an extra “S” it would save me some debating power! 🙂

Back tomorrow with a washi minibook tutorial – if I can get the paper I need!