We finished dinner early a few nights ago and I dragged everyone out with me to the thrift store with the promise of ice cream after.

And it was a good trip! Here are my finds: 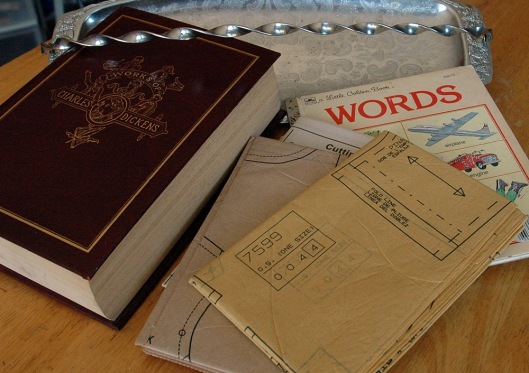 …an old book to cut up, a great kid’s book for colourful backgrounds, some sewing patterns, and a bonus silver serving dish.

I love the kid’s book – fun and colourful for collage backgrounds and small enough patterns to blend in. The patterns were a steal, $0.69 for two, I should have bought another package… 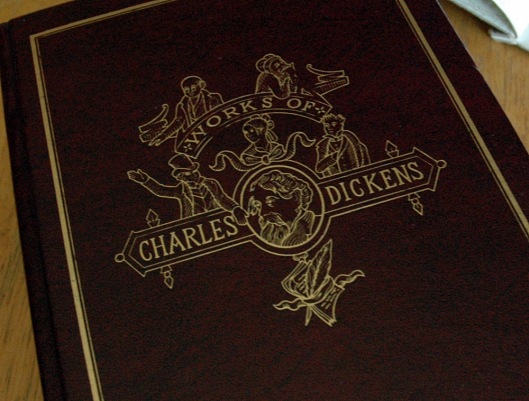 …is awesome! It was printed in the 70’s so it’s got nice old yellowing pages with age and water spots and it has some fantastic pictures too. I apologize to anyone who loves Charles Dickens but I already have a collection of his works so I don’t feel bad at all. I could have gone with the copy of War and Peace but there were no pictures. I do, however, regret not buying the copy of Heidi – it had great color pictures in it. I think another trip is due to see if it’s still there!

And finally, I got this lovely piece:

…which I think is going to house my wood veneer shapes so I can easily rummage through them when needed.

As you can see from this picture: 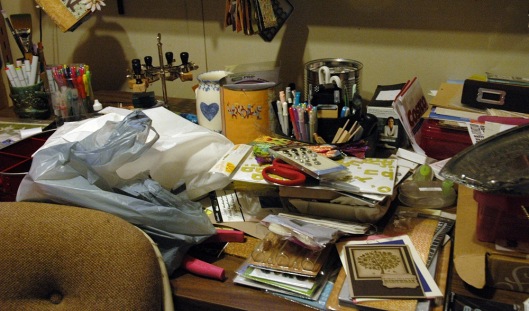 …it’s time for some organization and cleaning in my scrap cave again which is why I picked up the dish when I saw it!

After my great luck, we headed out to Menchies for frozen yogurt and, if you follow me on Twitter, you would have already seen this tweet. Let’s just say that M was not impressed with mixing different yogurts, toppings, and sauces. Apparently, “It doesn’t look tasty anymore!” Let’s just say that we were very close to a total meltdown and I swore I’d never go back again. With the kiddies, that is!

All in all, it was an entertaining and productive night and I’ve already had a chance to use some of my goodies on a canvas. I’ll show that off later this week!

Hope you’re all enjoying the last long weekend of the summer – I know I’m not ready for it to be over yet! 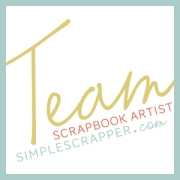 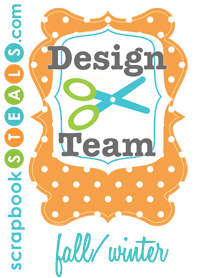 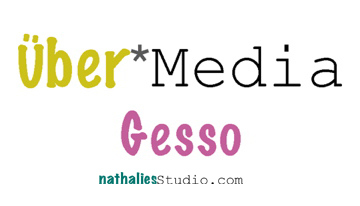